Load More...
You are here: Home / Fashion / Catwalk Report: Fashion in Motion – Phoebe English //
Fashion in Motion, a series run by the V&A, aims to showcase the works of emerging and thriving designers against the cultural backdrop of its galleries. This month’s show celebrates the work of British designer Phoebe English and her evolution over the past six years in the fashion industry. 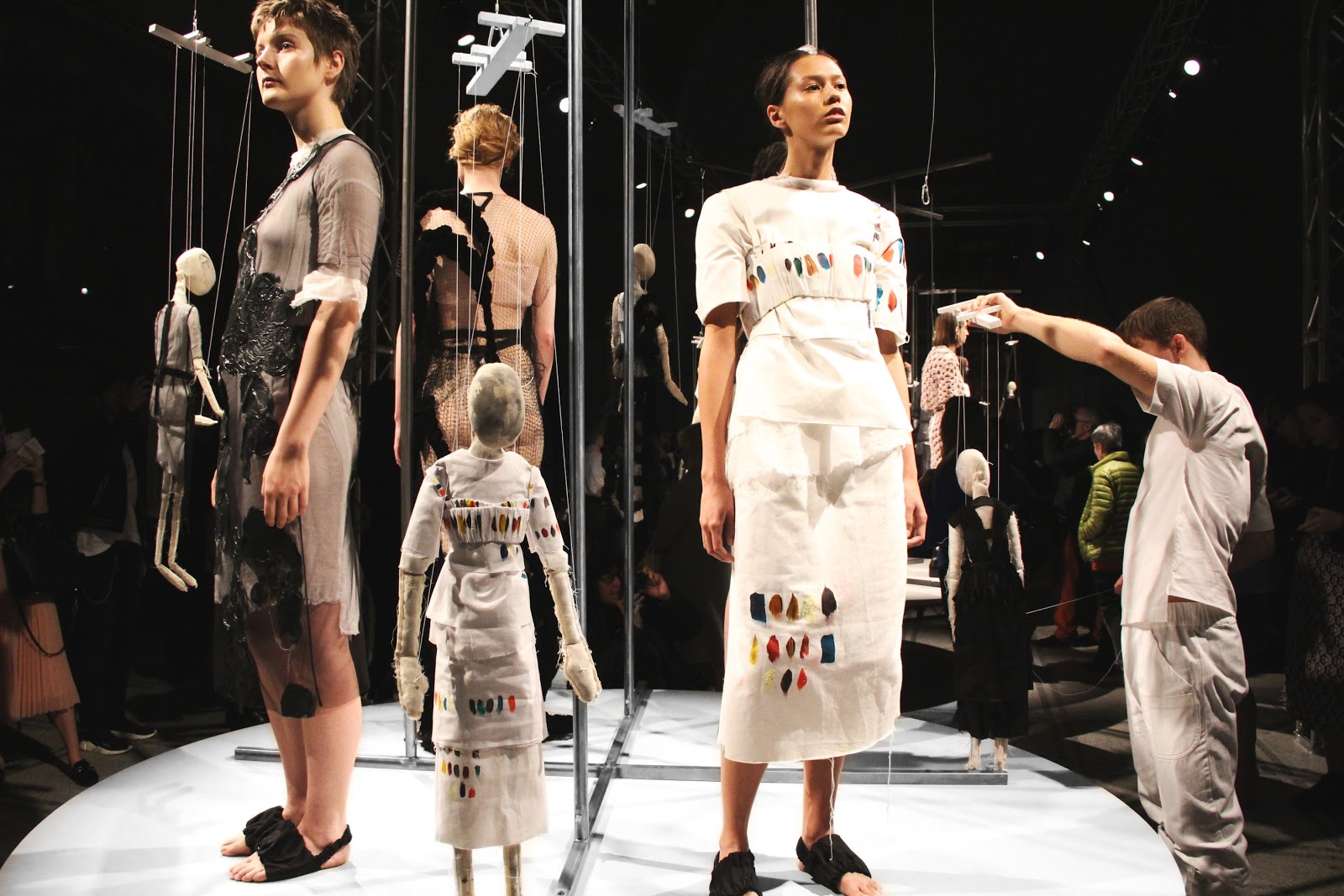 Upon entering the Raphael gallery, six circular podiums stood along the stretch of the room, creating a transient space allowing spectators to move freely around. Unlike a traditional catwalk show, the audience is able to look at the collection momentarily in some parts and in more depth in others, depending on their stylistic preferences.
Four models stood on each podium, highlighting some of English’s best work for each year, forming a capsule collection of pieces that work with similar textile techniques English is inspired by during that season. 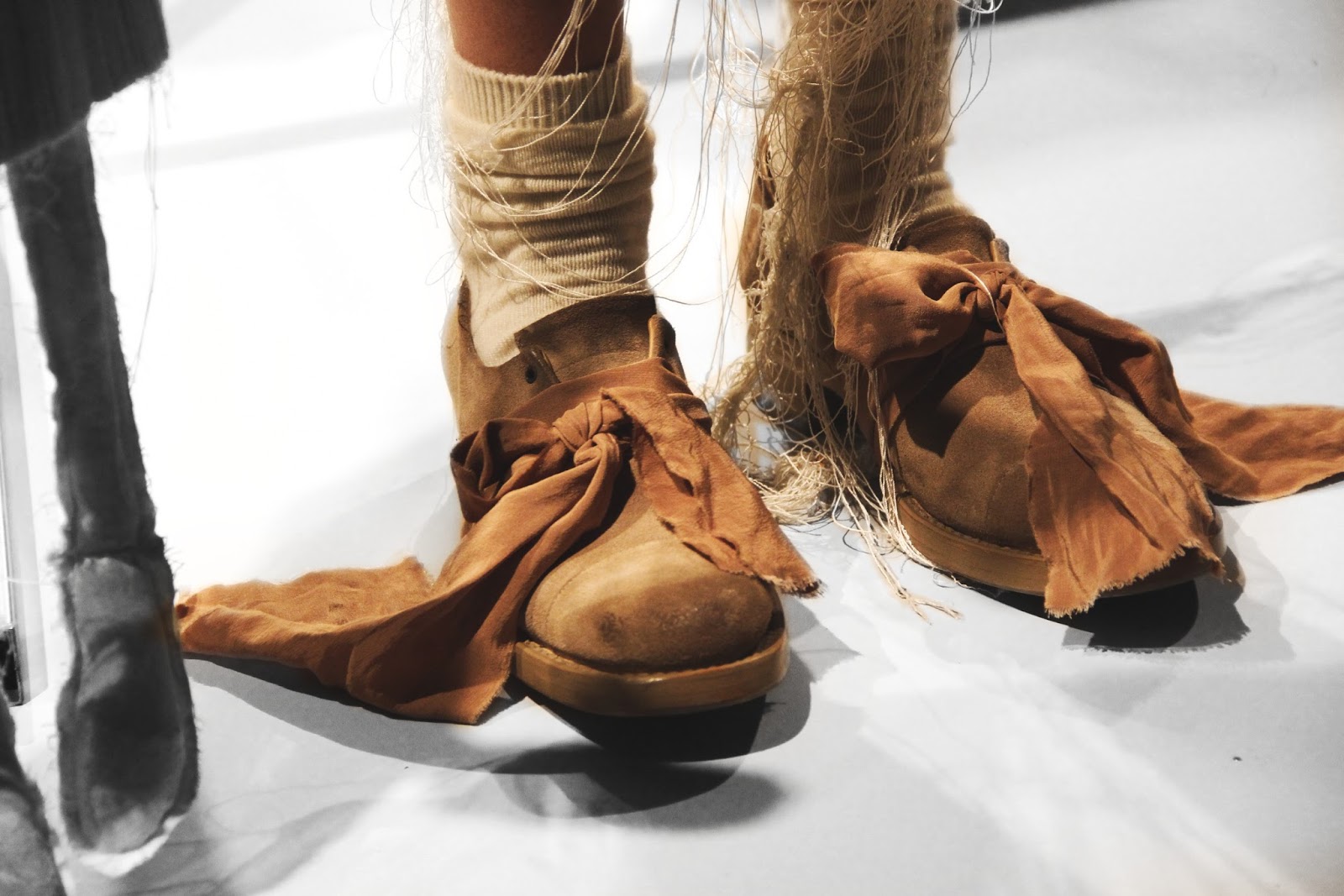 The progression is notable, as English’s collections become more intricate and experimental. English successfully works with different weaving and knitting techniques, producing a tactile and three-dimensional garment. These textures are further enhanced by the immersive set design, allowing the item to be inspected and photographed.

The location of the exhibition holds itself close to Phoebe English’s heart, as she revealed: “The V&A is a temple to all the endless creative possibilities of the human mind. To be involved in such a historic and contemporary space is a very special thing indeed.” 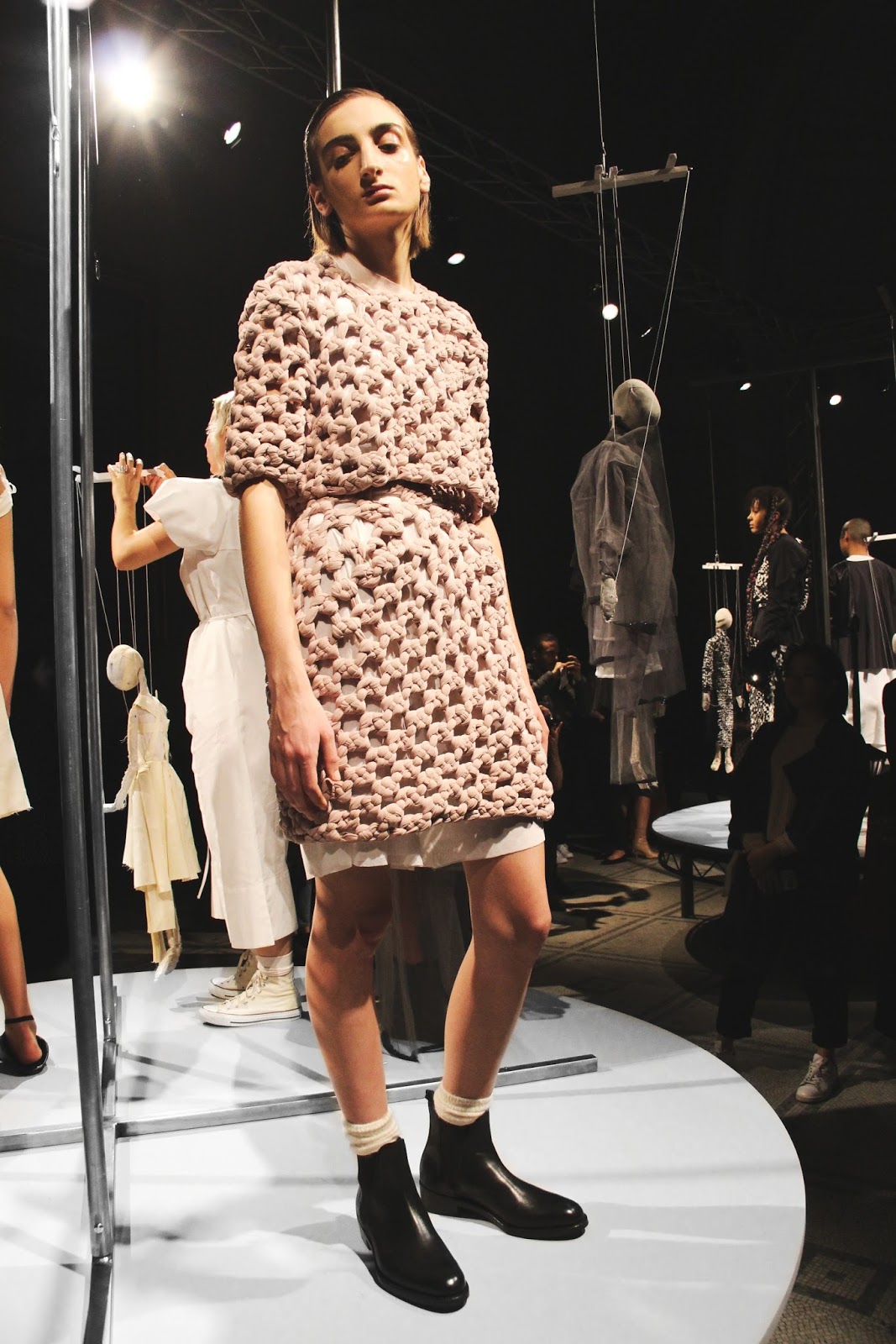 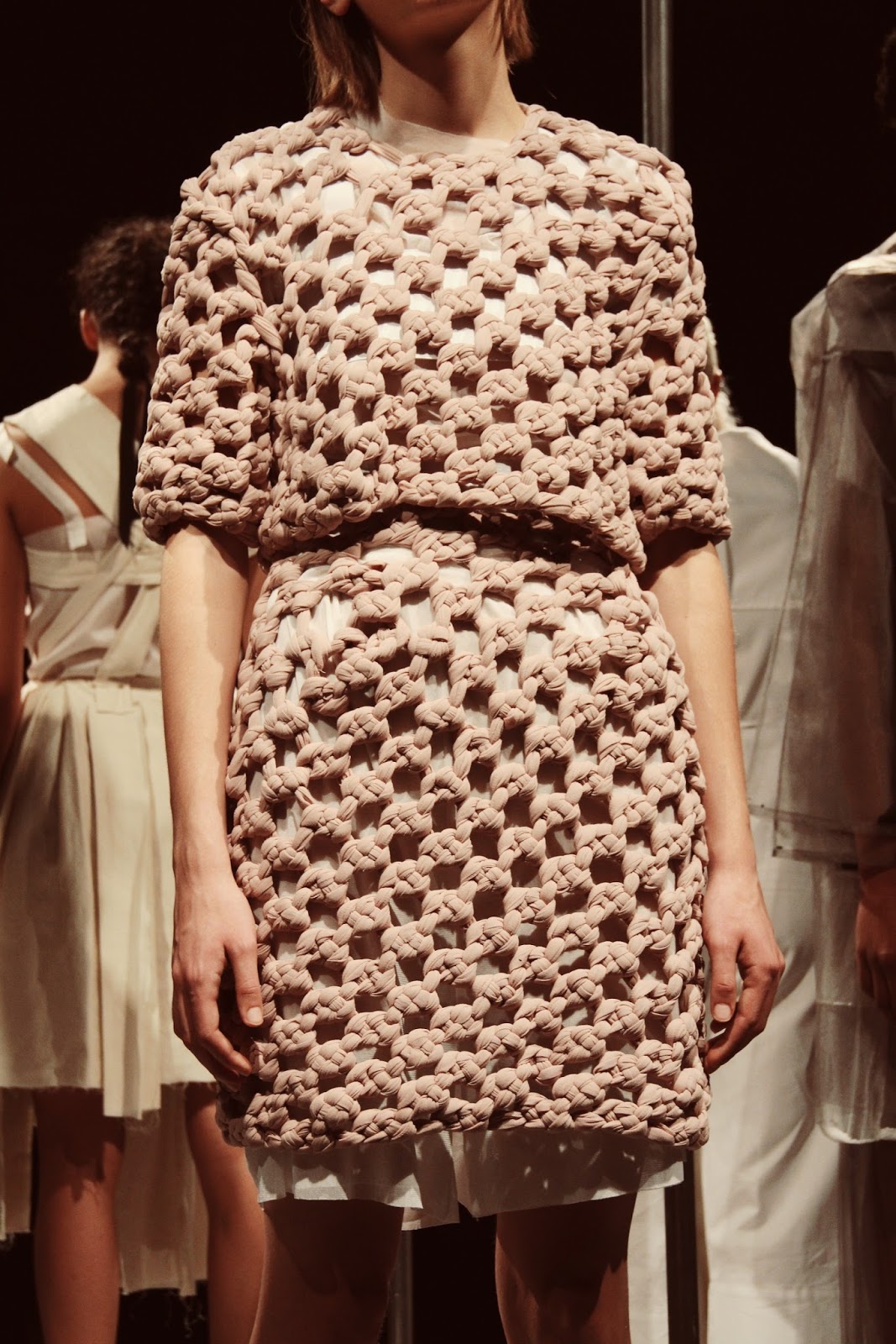 Majestic music enhanced the production, but influenced the mood of the audience. People mostly walked around the podiums in silence, taking care to appreciate the notes and concerto from the harpist, Valeria Kurbatova. The dulcet tones from the harp brought to life the string puppets which were positioned next to the models, wearing miniature replicas of the garments. 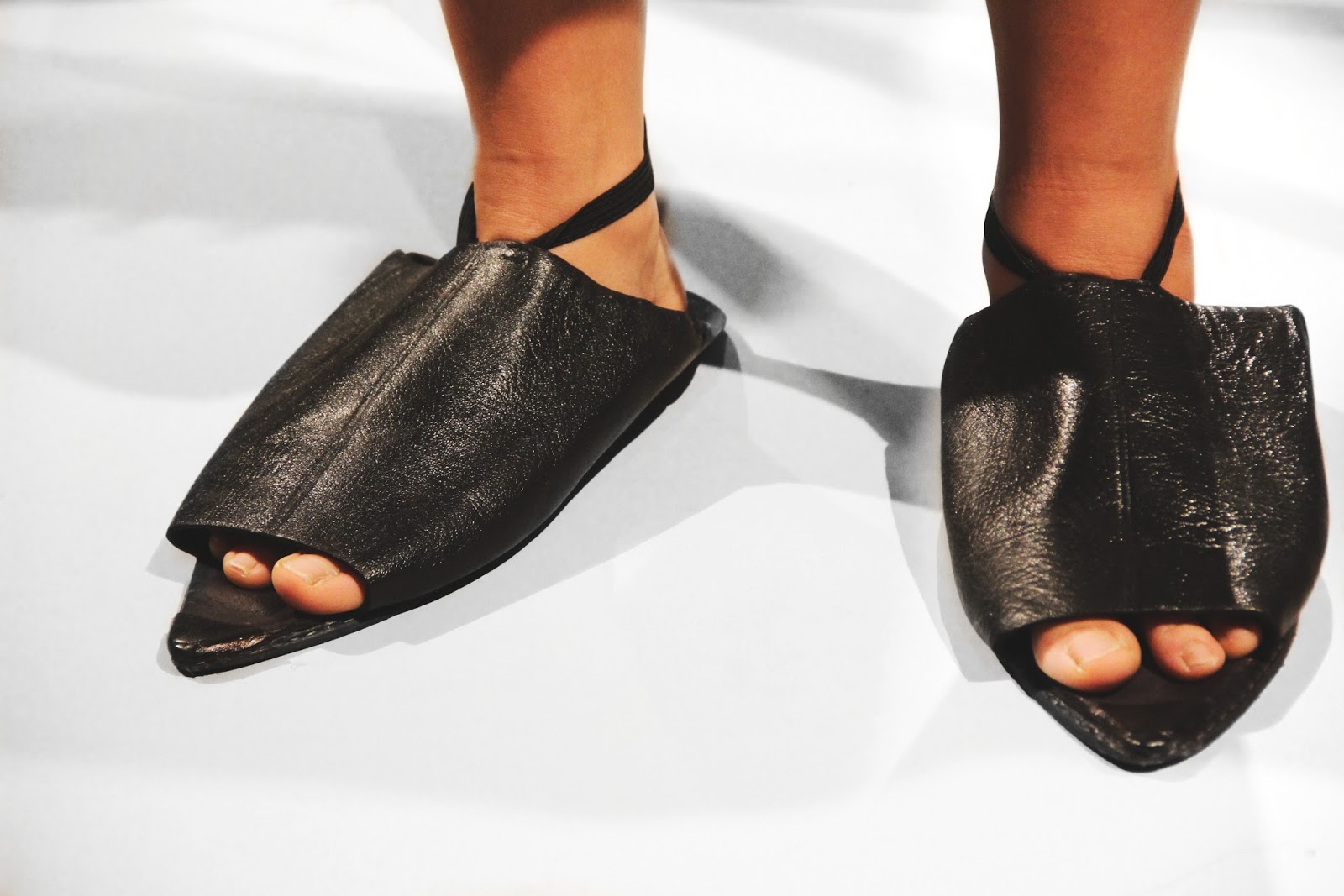 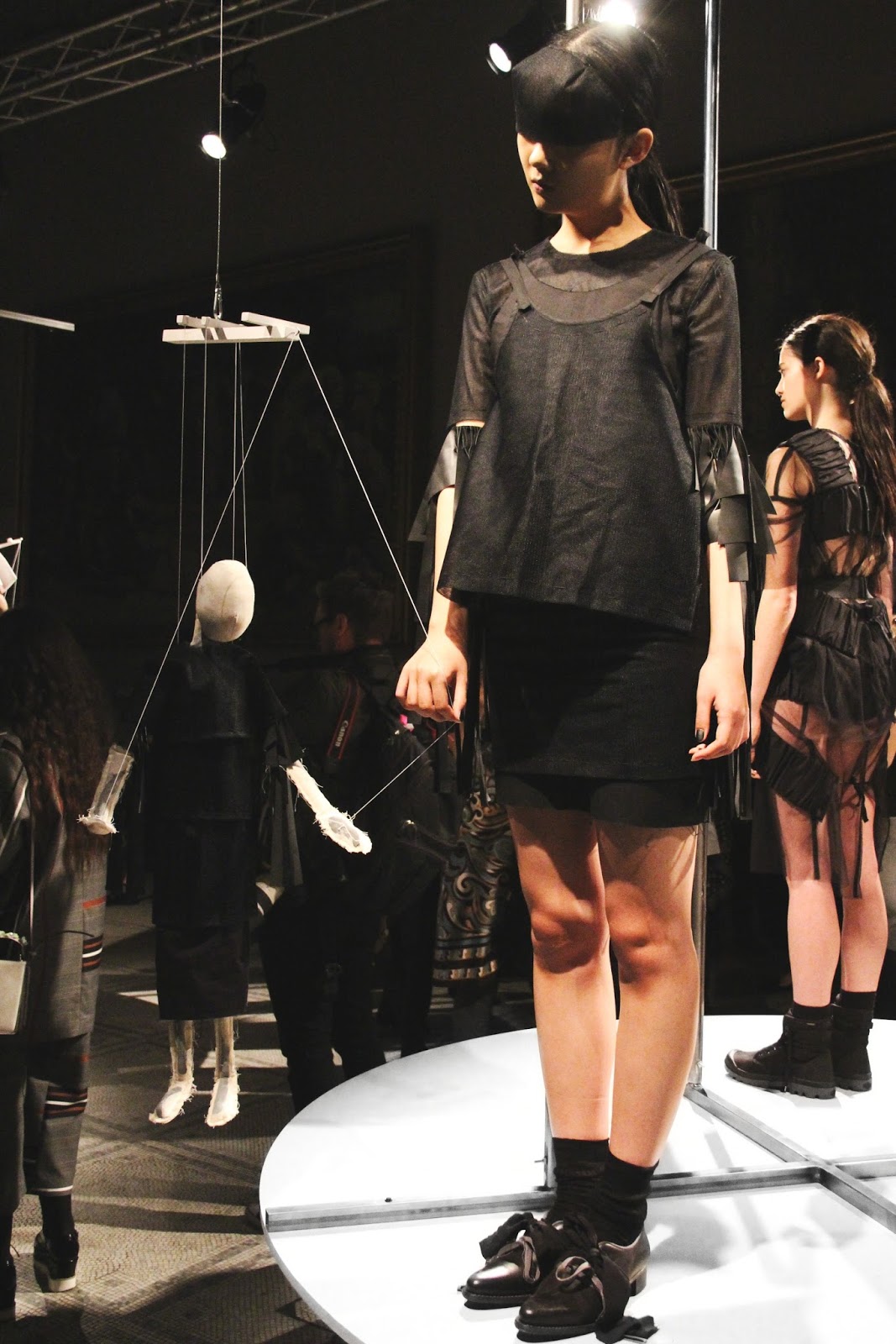 The collection was driven mainly by a monochromatic colour palette, creating bold and functional formalwear. It is evident that English is particularly influenced by the layering trend. Layering is used in the monochromatic or all black looks to convey the garments depth. A model stands in a short sleeved chemise, that has gathered, rectangular pleather cuttings stitched gregariously at the hem of the sleeves. This is then layered with two camisole tops, one being slightly larger than the other. The chemise itself has an additional rough-cut slip underneath it. This look is paired with black socks bunched down to add texture and black brogues laced up with overhanging black and grey fabric. 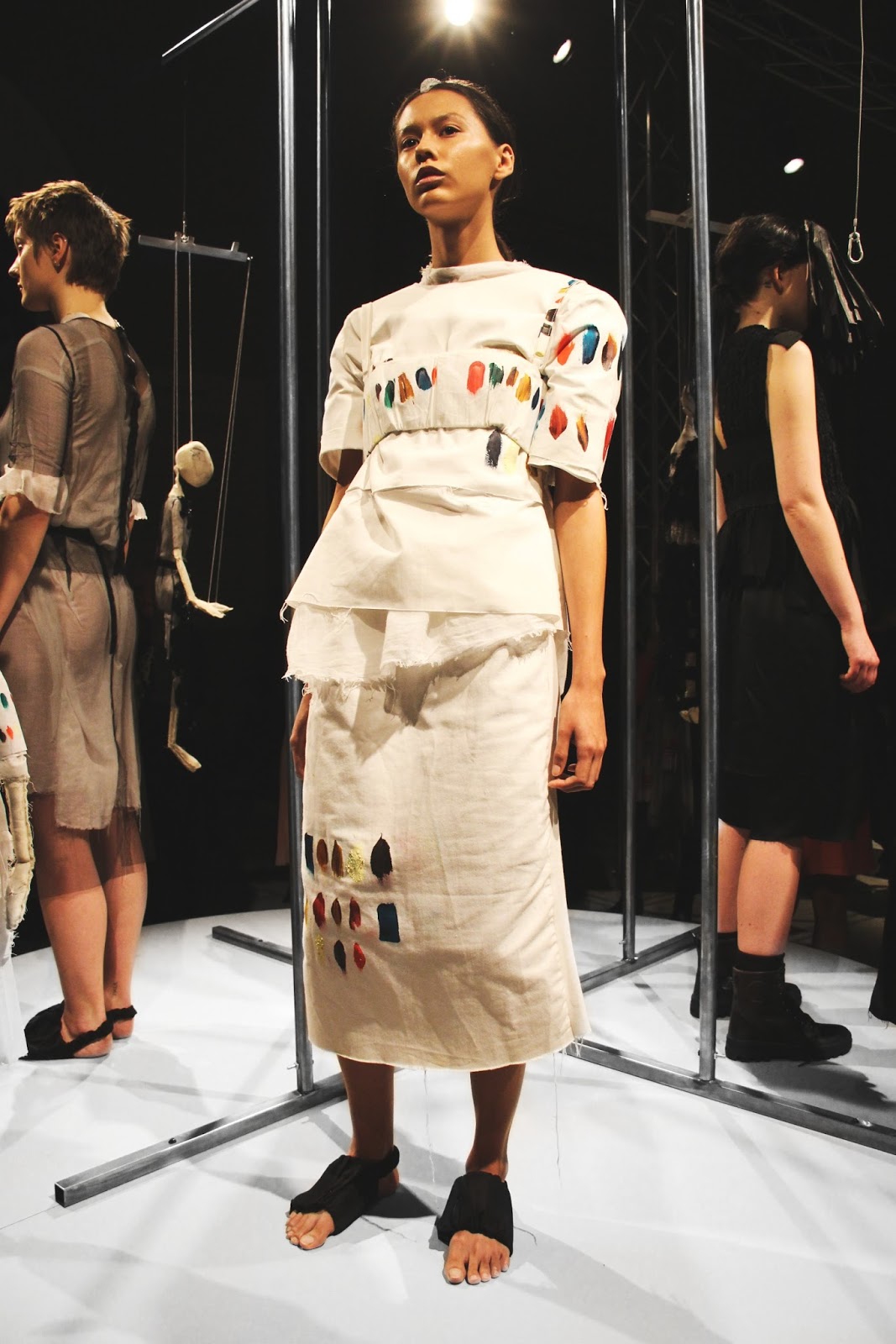 Nude shades and beige calico were used intermittently and further enhanced English’s desire for practicality. A calico empire line dress with elbow length, set-in sleeves was a memorable garment. A robust box-cut camisole was worn over the top and exaggerated the rough-cuts of fraying calico, to construct a peplum silhouette. This dress was enlivened by the use of green, red, navy, brown and yellow brushstrokes painted across areas of the garment to imitate a painter selecting what colour they want to use. It is as though the model and the calico dress become the muse for English’s designs and this piece carefully communicates the creative fashion design process. 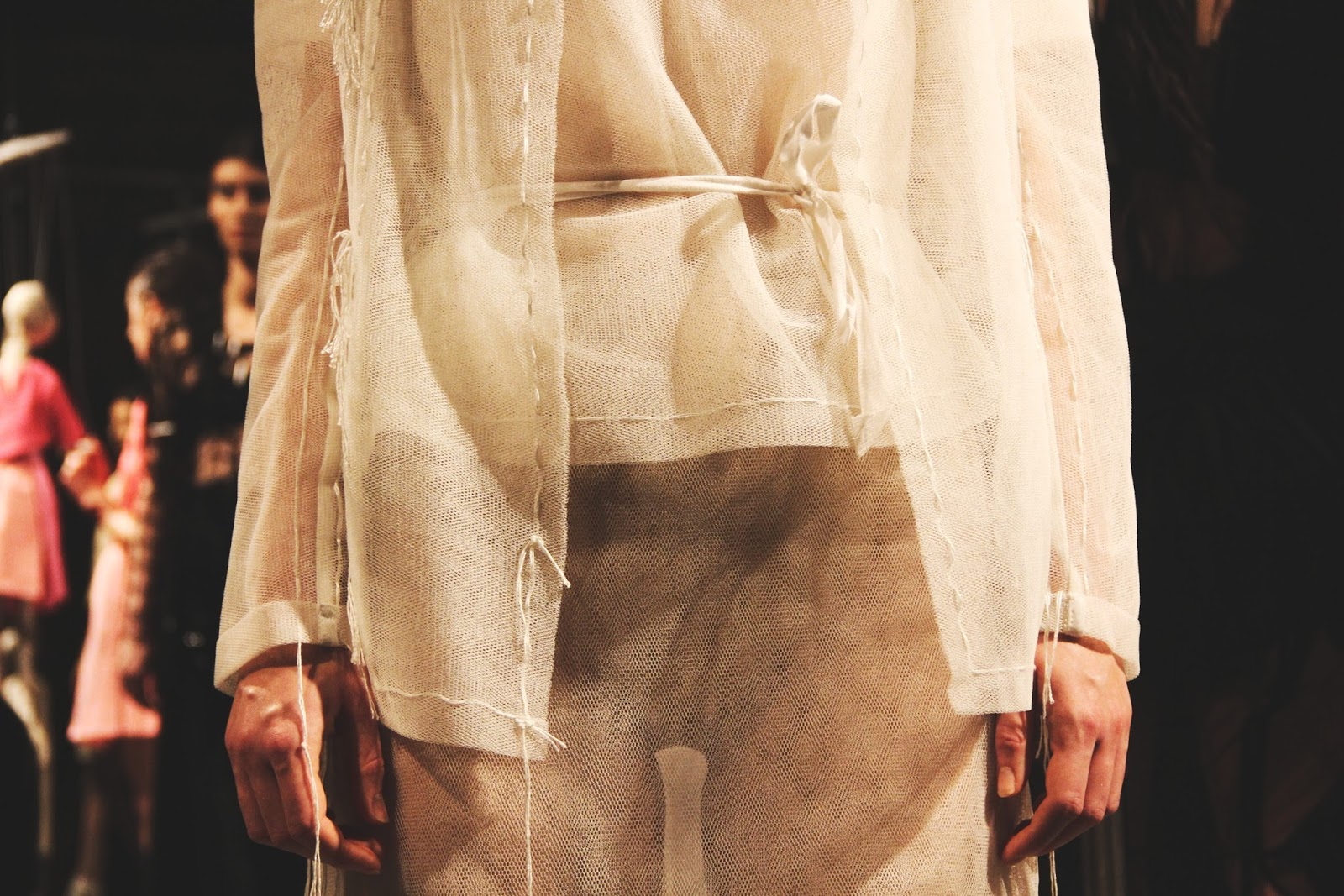 A number of pieces however did inject more vibrant colour into the CSM descendant’s collection. A fuchsia pink, elbow length crop top was paired with a lighter pink, high rise waistband skirt. The front section of the skirt split in two to show off a plain pink material, whilst the alternative side was tasseled and playful. 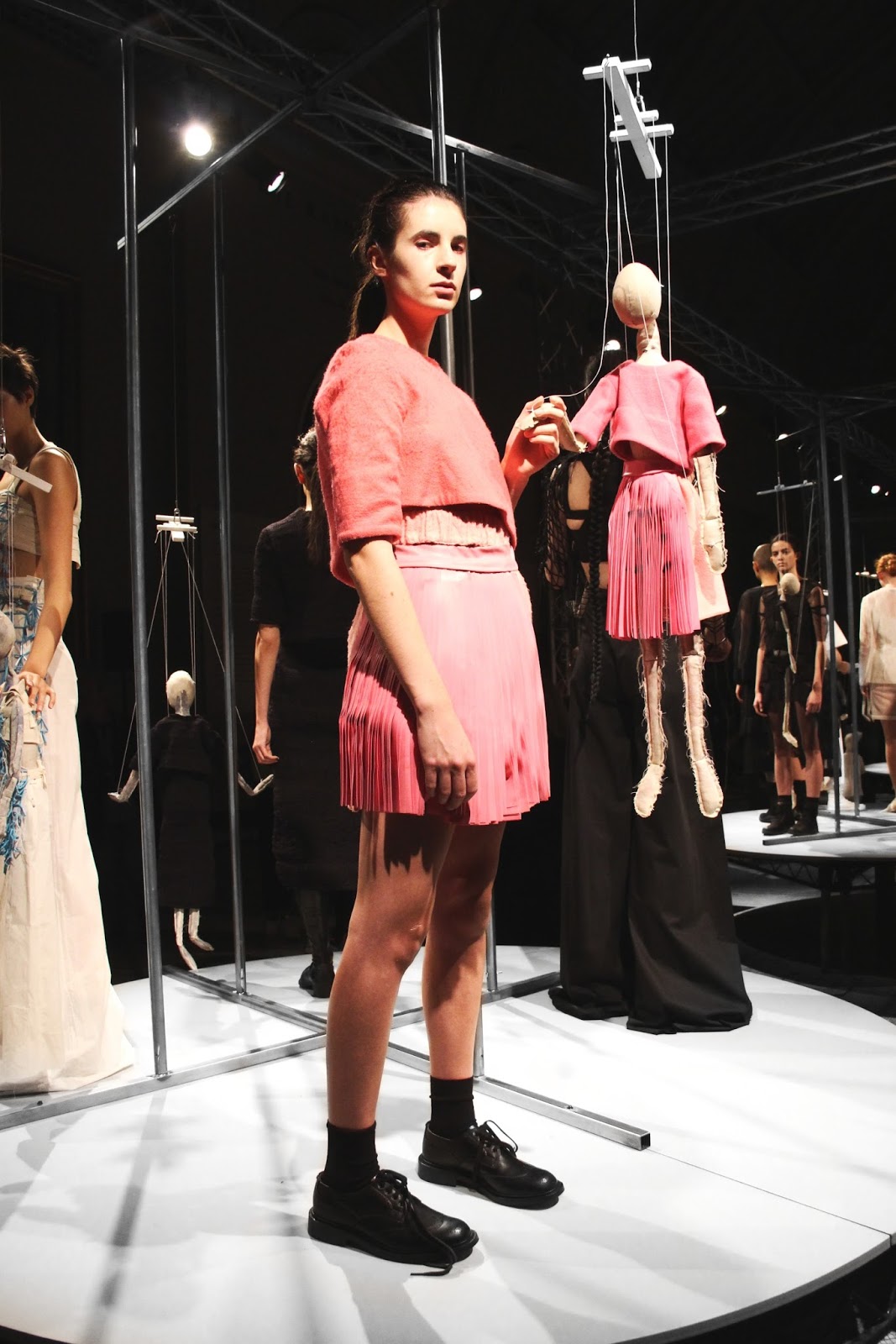 English, who was listed as a Forbes 30 Under 30 in their influential Art and Style category clearly enjoys experimenting with her mediums and textures. Sequins, embellishments, plastic and paper beading to fashion her desired patterns. 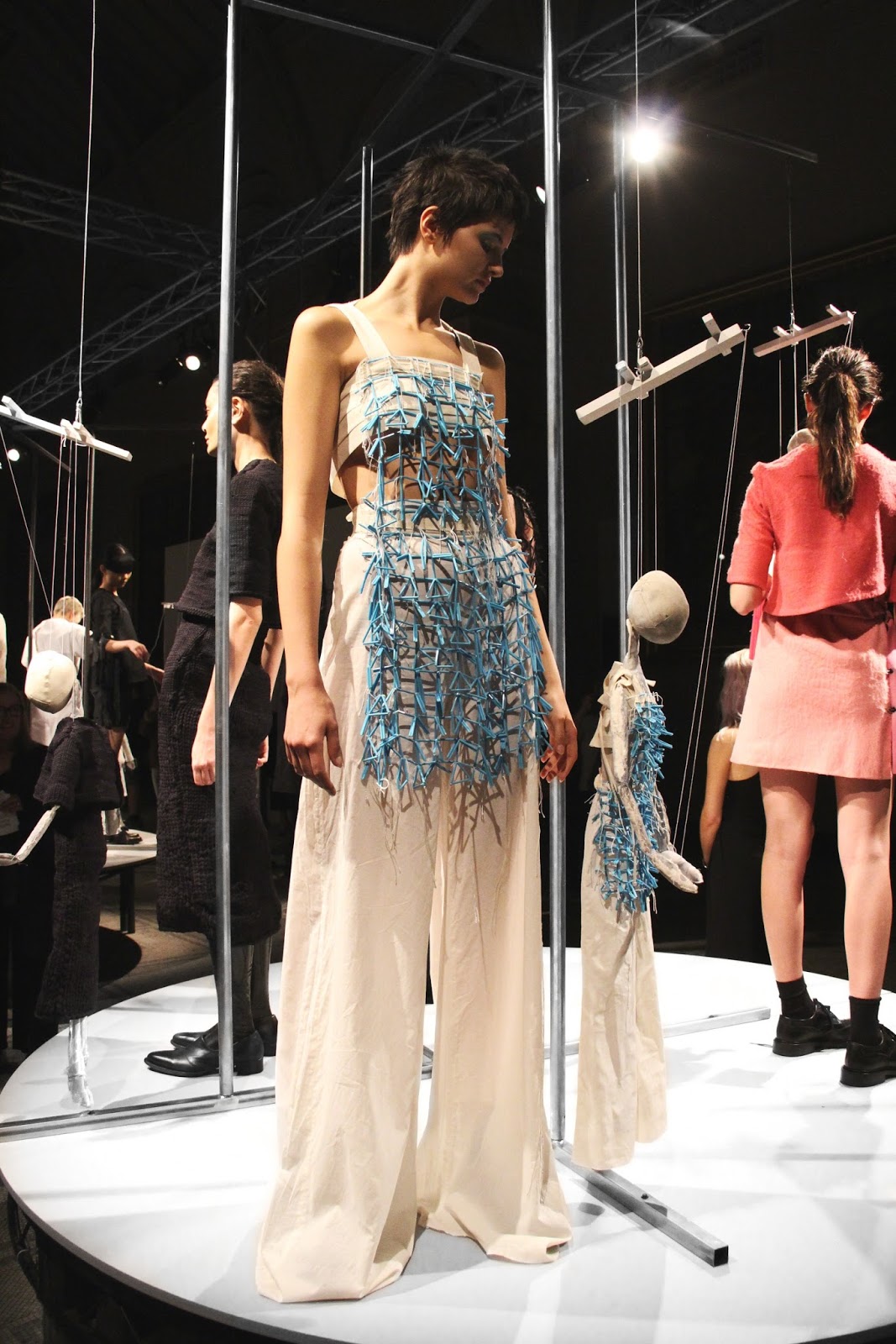 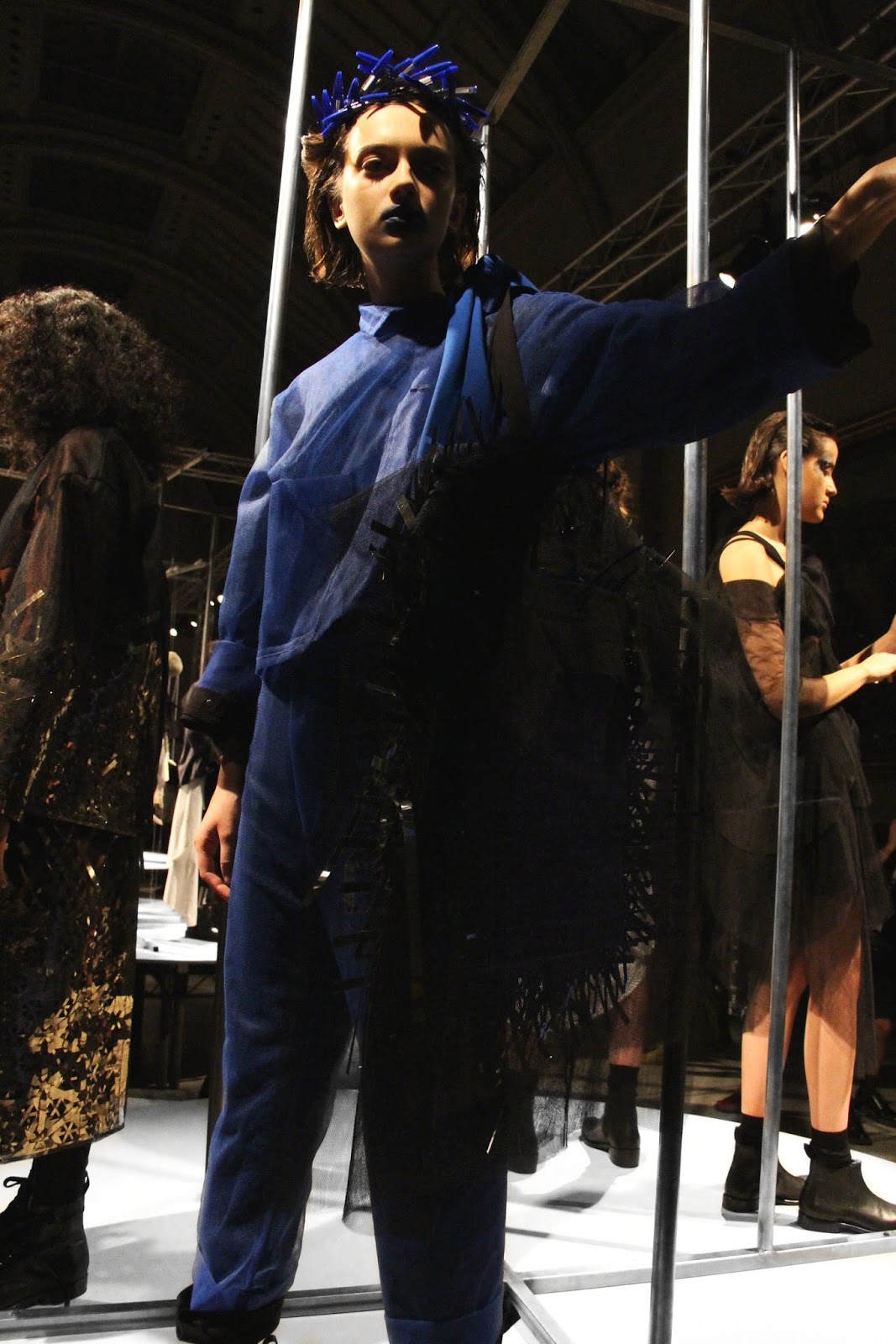 The blue pens were woven in the models hair to create a pronounced crown on her head. Persian blue was featured in this model’s entire look, from the navy, smudged and over-lined lips to the outfit itself. The model sported a mesh, long sleeved pullover and straight leg trousers. An abstract feature of these trousers were the use of a double hem from the blue mesh trousers and a black trouser worn underneath. Paired with patent Dr Martens boots, this look is an effortless attempt at modern workwear. 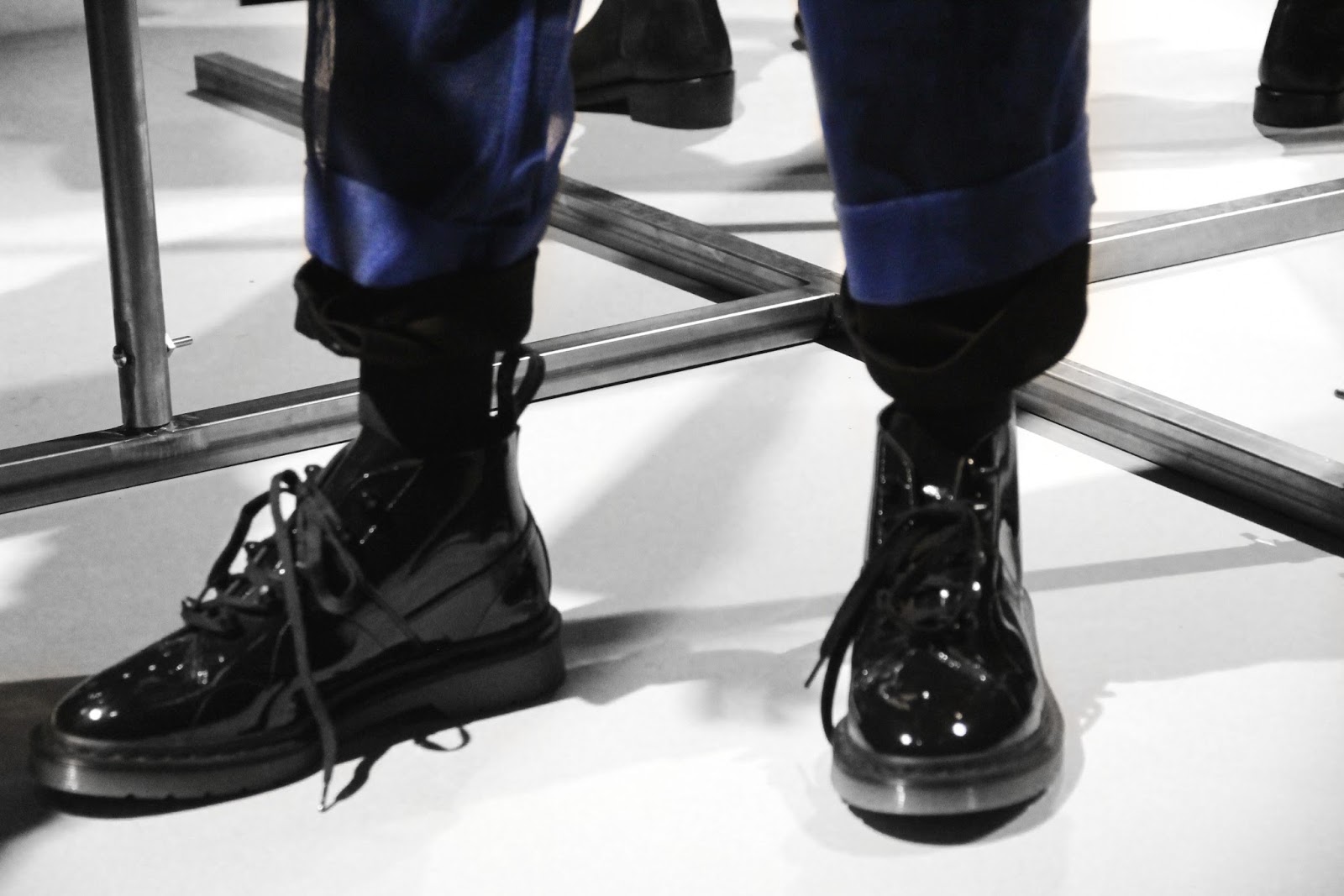 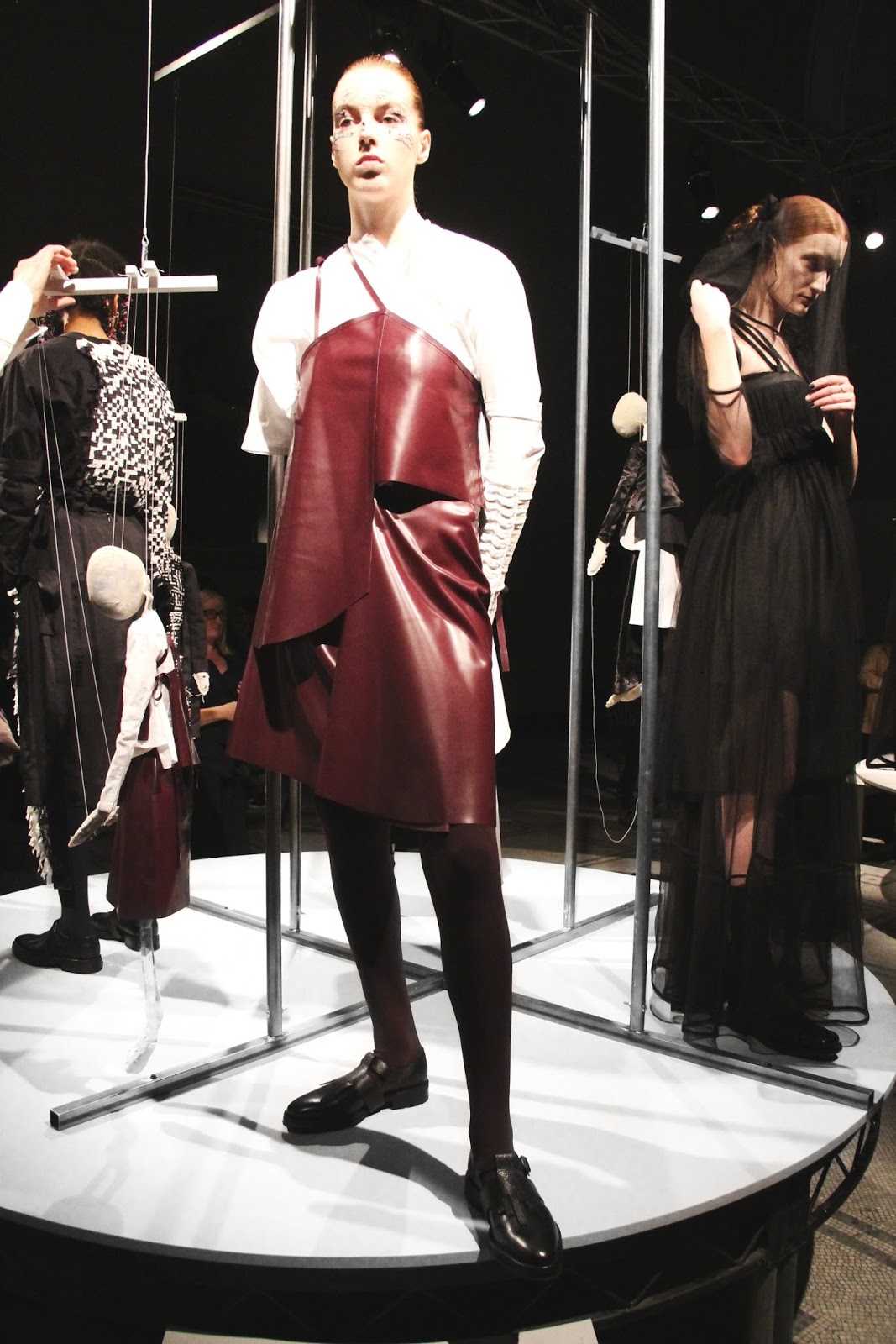 Rectangular cuts of acrylic were layered and stitched closely together to replicate the plumage of a bird. The top of the dress included short pieces of acrylic that gradually got longer until it reached the waistline. It was then cut short again from the waistline down to the bottom of the dress to dramatise the look. 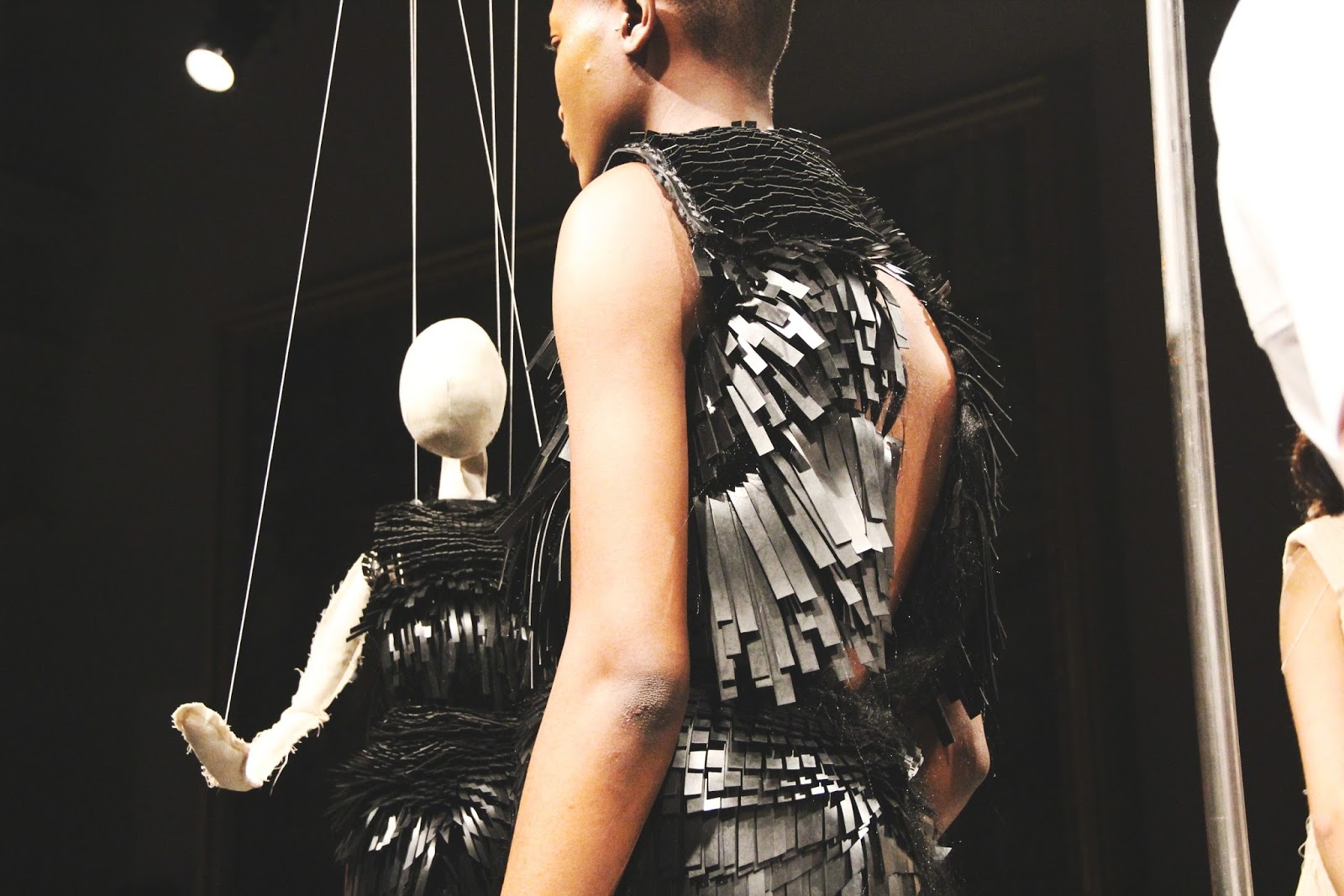 Having presented her designs in a more intimate and fluid show, it enabled the attendees to access the collection in a more tangible way, perhaps encouraging them to want to purchase the pieces. 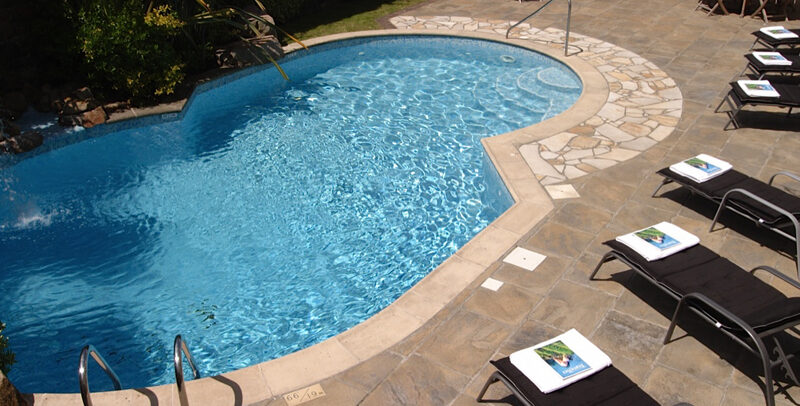