Load More...
You are here: Home / Lifestyle / Food / Review: Fancy Crab London
Fancy Crab is a chic restaurant located on Wigmore Street, a quieter back road just behind Oxford Street. It experiments with the many flavour combinations that stem from just one glorious ingredient, crab. Of course like with many eateries who sell a niche product, there are other options aside from the main spectacle, for those who have somehow missed the point of the restaurant. But still, the options are there, so this does not limit who you dine here with.
Crab isn’t exactly one of the most delicate dishes to feast on with company. It can be a stressful ordeal at the best of times, as you work hard to get inside the shell and find rare chunks flavourful meat. This often results in an accident or two, and a shard of shell from a claw propelling itself across the table. Getting to the white and brown meat is more difficult and I am usually the type of person to give up on the whole process when things get too out of hand. Luckily I wasn’t with someone who would judge my table manners too closely, otherwise I would have caused some serious social injury. Instead, with a friend in tow, we vowed to leave our seafood inhibitions at the door and just get our hands dirty. After all, the dishes don’t come cheap so it is important you get your money’s worth.
I requested that we could be moved from our table of two to a more private and larger booth with a bigger table. It was clear as soon as we sat down at the marble tables lined in the centre of the restaurant, that we were going to be too tight for space once all our dishes had arrived. The waitress was very accommodating and moved us over with ease. 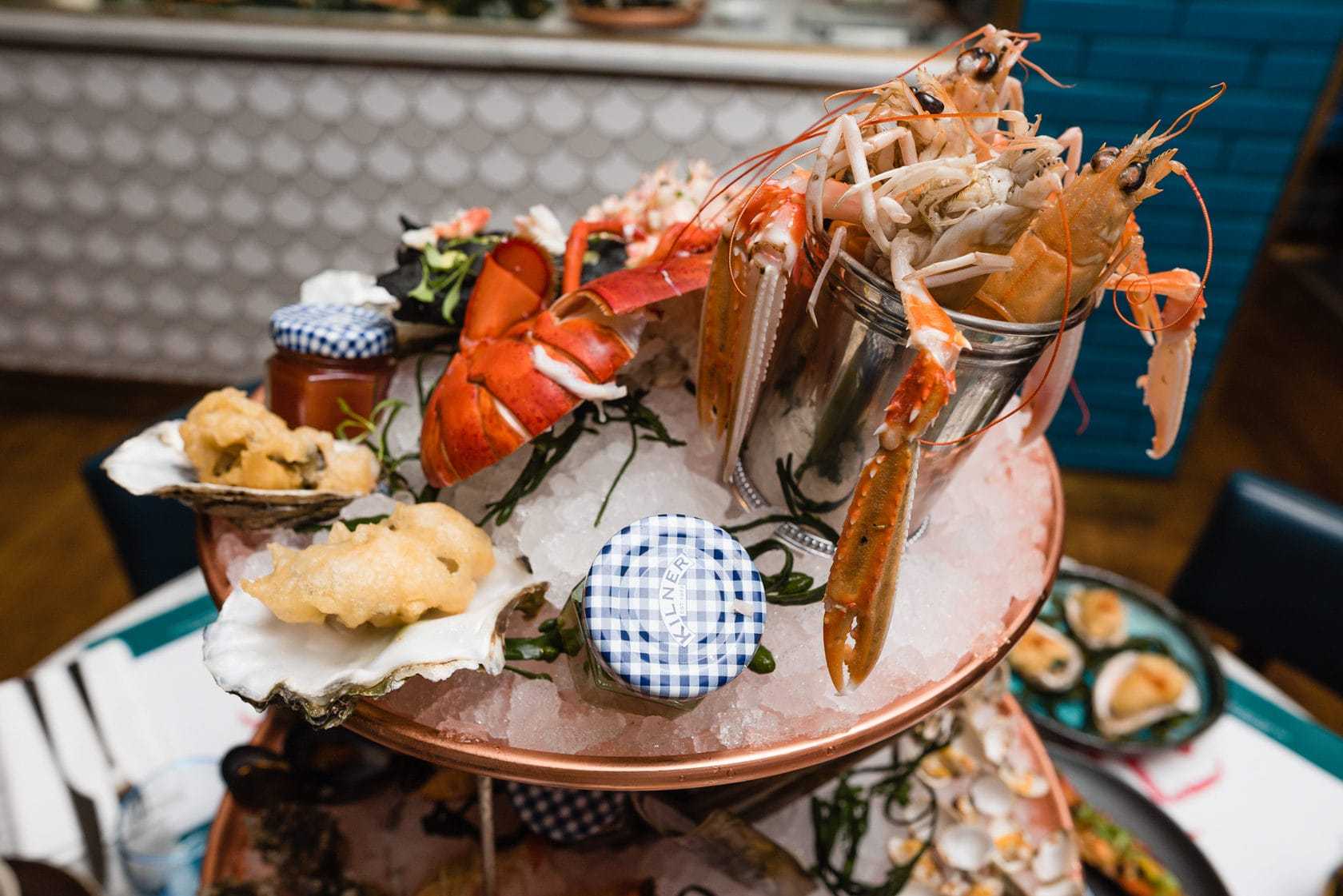 The restaurant itself is well thought out and the decor reflects the theme of the food. A large blown up pop-art style image of a red crab is wallpapered on the main wall, where the deep blue coloured plush booths line. On the other side of the restaurant, iconic art replicas like Grant Wood’s ‘American Gothic’ painting adorn the wall, but were edited to include a crab in the picture. There is a clear eclecticism with the art choices, but this is muted by the underlying theme from boat-like table accessories and the tangled fishnet chandelier, hanging prominently in the corner of the room.
The restaurant tries to be as international as possible with the menu, with clear influences from Russia. As the crustaceans are only caught once a year, it is a premium product. We also learn that only the males adult red king crabs are caught to keep the harvest sustainable.
Before we decide what we are going to order, the waiter first brings over a whole red crab for us to stare at in sheer awe, but mainly with the purpose of informing us on the different parts of the crab and how they impact the flavour of the meal. These large crustaceans are also visible laying on ice in a glass counter at the furthest part of the restaurant.

Firstly, we started with the King Crab Bisque Soup, a crab broth which had a heavy mushroom base, served in a cup and saucer. We proceeded with the King Crab Guacamole, a completely new mix of flavours to the palette. What made the experience more authentic was that the waiter combined the raw ingredients with a large pestle and mortar to make the guacamole from scratch and to our taste and texture. This was then followed by Rose on Ice, a succulent and more meaty part of the crab which was served with thin pickled ginger slivers, a squid ink mayo and a tangy mango dip.
We were then presented with a single Tempura Crab Claw. It was served to us extremely hot and had it not been for the heat radiating from the claw, I would have finished it almost as soon as it had arrived to the table. It was less of a tempura style batter and more of a breadcrumb texture, but worked well with the crab meat. This dish sits on the more expensive side at £12.

The Singapore Chilli Crab met expectations and was by far my favourite dish from the menu. It was surprisingly sweet and creamy, including plenty of crab. It was served with two sweet toasted brioche buns, which were used to soak up the succulent juices of the dish. I was a little disappointed however, with the heat from both the flavour and how it was served. Fresh chilli did come on a side plate with the meal, although I would have preferred it to have been already combined in the dish for an extra kick.
For dessert we sampled both the Chocolate Fondant with house Salted Caramel Ice Cream and the King Crab Cheesecake with Berry Compote. At both £6, the dishes are just about manageable in price. I was keen to know what exactly was in a King Crab cheesecake, but you will be delighted to know that no actual crab meat features in the dish. Instead it is shaped to replicate part of the crab. The salted caramel ice cream was divine and was the highlight of both the desserts we sampled.
Although Fancy Crab serves a palatable range of premium crustacean dishes to Londoner’s, it remains to be on the pricier side when portion sizes and overall expectations are taken into consideration. But, I do think that Fancy Crab offers another culinary dimension to London’s ever-expanding restaurant scene.
92 Wigmore Street, London, W1U 3RD

12 Room Interiors That Will Inspire Your Next Redecoration //